The School of Korean Traditional Arts of the Korea National University of Arts was established in 1998 and consists of the most competent professors within the field of traditional arts in Korea. The presence of such a strong faculty motivates students and allows professors to become role models for students in their artistic lives. The faculty exhibits not only practical knowledge, but also the history and success of their own artistic careers. In this Festive Korea, Korea National University of Arts will join hands with local Wuji Ensemble to bring Hong Kong audience extraordinary traditional music and dance in HKAPA on 24th October. On 25th October, Korean group will present selected performance in Foyer of Hong Kong Cultural Centre.

Gayageum is one of the Korean traditional instruments that have more than 1,500 years of history. Nowadays, many derivatives were made such as higher-tone, mid-tone, lower-tone gayageum with an acceptance of harmonic melodies by Western influence. The series of folksongs express more interests on instrumental play. 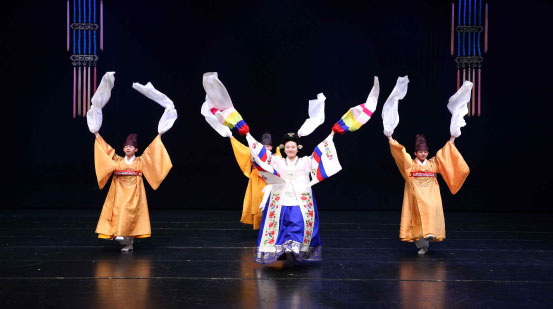 Taepyungmu has been designated as Intangible Cultural Asset No. 92, and Kang Sun Young has been the sole successor to Taepyungmu. This dance was performed to pray for a good harvest and the country’s peace and prosperity. Taepyungmu’s hallmarks are the light and rapid foot movements to the unique and beautiful melody and rhythm of Korea’s folk music. 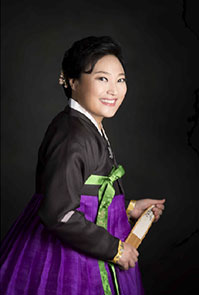 “Heungboga Baktaneun Daemok” (Heungbo’s Breaking a Calabash) in Heungboga is the climax that Heungbo finally becomes rich after breaking a calabash which the swallow gave to him as a reward. Heungbo raises the calabash devotedly and gets huge gourds. When it became Chuseok (Thanksgiving Day), poor Heungbo and his family break the calabash gourds to eat them. However, money and rice from the first calabash, clothes from the second calabash, carpenters who would build a house from the third calabash flow out and Heungbo becomes rich in one day.

“Hallyangmu” is a performance dance that expresses “a pleasure-seeking nobleman, or hallyang, with an understanding of art enjoying himself and taking pleasure in nature and life.”

Among the few Korean folk dances performed by men, “Hallyangmu” is an exceptionally artistic dance expressing the romanticism of the hallyang. 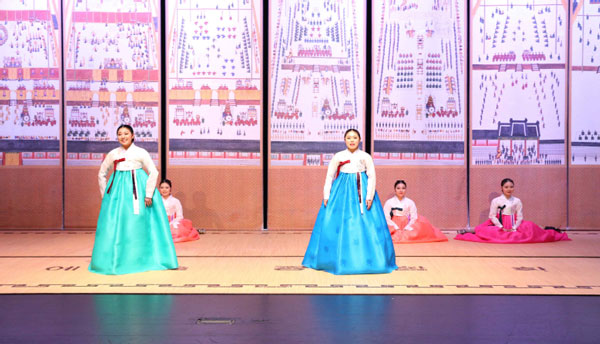 Minyo refers to folk songs that naturally emerged and have been orally transmitted from person to person for a long time. Minyo that people do not have to learn to sing but already know in their living is considered the most precious intangible cultural heritage because it reflects the life style and emotions of the people. 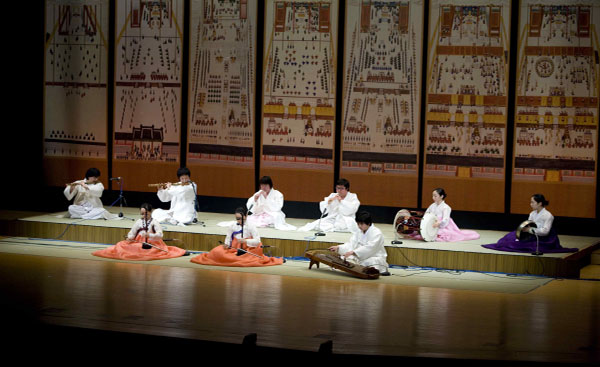 Sanjo is originally written as a solo piece, however it is also performed as ensemble (hapju) on today’s modern stages. Sanjo hapju delivers a unique impression throughout rich and full sounds from the harmony of all different instruments. Each instrument rather takes turns of solo parts in order to create a balance and dynamic contrast between the solo and ensemble. 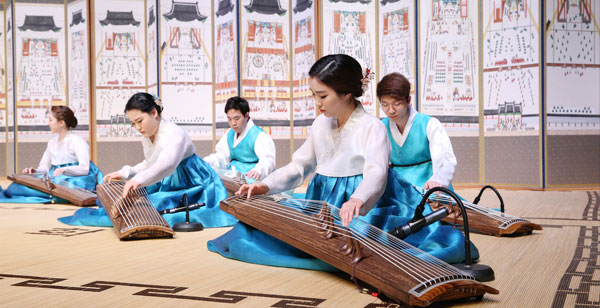 A 25 stringed-gayageum is a newly modified version compared to the original gayageum, and is made for easy tunings or transposition of scales on it with Western instruments. Such songs as “Let it be”, “Hey Jude”, and “Obladi Oblada” are the representative songs of the group The Beatles. We can also experience a big range of the instrument with such pop songs by gayageum. 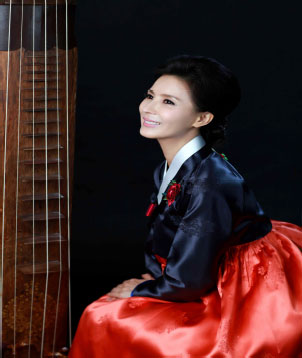 Han Gab-deuk’s Geomungo sanjo consists of ‘Jinyang-Jungmori-Eotmori-Jungjungmori-Jajinmori.’ It is unique that Eotmori was added in between Jungmori and Jungjungmori. The melodic structure is regarded as a ell-organized sanjo compared to another popular lineage, Sin Qwae-dong ryu. It is highly acclaimed for its diverse tone variations and delicate ornaments (sigimsae).